In 2013 China installed a record 12GW of solar power capacity, considerably more than Germany ever has in one year.  I read stories about it all over the place.  It was big news for renewable energy watchers.

What I didn’t read in any of those stories was that in the same year China installed about 40 GW of solar water heating capacity. You see solar hot water may be quite boring, but it still owns solar power in terms of installed capacity. 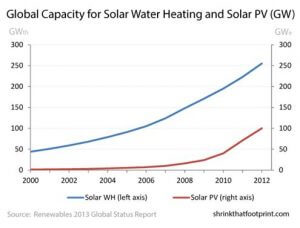 In the graph above the blue line shows the growth of global solar water heating in GWth.  The figures are only for glazed hot water systems from the Renewables 2013 Global Status Report.  By 2012 around 70% the 255 GWth of global capacity was installed China.  A testament to how cheaply China produces and installs solar hot water.

The red line shows the growth of solar PV.  The sharp growth in installed capacity since 2007 reflects falling costs and growing enthusiasm for solar PV around the world.  By 2012 total installed capacity was up to 100 GWe. You can see more about the data in our Top 10 Solar Countries post.

Although the scale is the same I’ve put the data for each on separate axes because thermal and electric capacity are not directly comparable.  But lets not let that spoil our fun for a minute or two.

Instead why don’t we compare Chinese solar hot water capacity to all the solar PV installed globally by the end of 2012.

That’s quite a chart isn’t it?

By the end of 2012 all the solar PV capacity in the world totaled about 100 GWe.  Meanwhile in China solar water heating capacity had reached roughly 178 GWth.  The Chinese are seriously loving their vacuum tubes!!

It gets better.  If you look at the combined capacity for solar water and photovoltaics China actually has about 20 GW more installed solar than the rest of the world combined.  So much for Germany leading the world in solar?!

Now . . . if you are a bit of an energy wonk you’ll have been twitching from the start that not only am I mixing thermal and electric capacity but that I’m also comparing capacity rather than energy generated.  Of course you’ve got a very good point, but I didn’t want to let that spoil the fun.

Now in terms of economic value it is clear that a kWh of heating is worth less than a kWh of electricity.  How different that value is depends very much on the fuel displaced, the heating system efficiency and relative prices of local fuel and electricity.

All that aside, you’ve got to give it to the Chinese. That is a whole lot of cheap hot water!! It reminds me a little of their 200 million electric bikes no one knows about.